The week-long tour includes some of Uzbekistan’s best attractions: the old trading cities and world heritage sites of Bukhara, Hiva and Samarkand, Shurrisabz, Timur Link’s hometown, and modern Tashkent. We also travel across the Kizilkum Desert and see the great rivers of Central Asia, Amudarja and Syrdarja.

Overnight flights to Central Asia, the capital of Uzbekistan, Tashkent.

Arrival in Tashkent in the morning, transfer from the airport to the hotel. After breakfast, a city tour of Tashkent: we will explore the old and new parts of the city, mosques, monuments and squares. (A)

After an early breakfast, transfer to the airport and a connecting flight from Tashkent to the city of Urgench in western Uzbekistan. From there a half hour drive to the city of Hiva. Hiva is an old oasis town on the edge of the Karakum Desert, which was once an important milestone along the Silk Road. We will explore the UNESCO World Heritage Site of the fortress city, its old palaces, mosques and madrasas, or Quranic schools. Overnight in Hiva. (A)

ACCOMMODATION IN
MALIKA HOTELS OR SIMILAR

Today it is a long, about 7-hour drive across the Kizilkum Desert to Bukhara. We stop on the way near the Turkmen border, along the longest river in Central Asia, Amudarja. The river flows from the Pamir Mountains through Uzbekistan and Turkmenistan to the Aral Sea, but its abundant use of water for irrigation has led to the drying up of the lake. Overnight in Bukhara. (A)

ACCOMMODATION IN
HELYVUSH HOTEL OR SIMILAR

We will spend the day exploring the famous historical sites of the Bukhara Old Town World Heritage Site. Founded in the 100th century, this Silk Road trading city and important religious center was once ruled by Arabs, Persians, Mongols and Turks. The last conqueror was Russia, which arrived in the region in the 1860s. Today, the city is part of Uzbekistan, although most of its population is Tajik. We visit the city’s magnificent mosques and Quranic schools, as well as e.g. In the mausoleum of Ismail Saman. (A)

ACCOMMODATION IN
HELYVUSH HOTEL OR SIMILAR

After breakfast, about 4 hours drive from Bukhara to the small town of Shahrisabz, best known as the hometown of the famous 14th century ruler, the national hero of Uzbekistan Timur Lenk, where he is also buried. We will explore the city’s historic sites before about a 2-hour drive to one of Central Asia’s most famous historic cities, Samarkand. We visit the famous Registan Square as well as the fine old madrasas of the old town. (A)

ACCOMMODATION IN
CITY HOTEL OR SIMILAR

We will continue to explore Samarkand’s great historical sites. The nearly 3,000-year-old Samarkand is the oldest city in Central Asia and one of the largest centers of the Silk Road. Destroyed by Genghis Khan in the 13th century, the city flourished again in the 14th century as the capital of Timur Link’s kingdom. Today, the medieval parts of the city are a historic World Heritage Site. We will also visit the Siyobi Bazaar in Samarkand. (A)

ACCOMMODATION IN
CITY HOTEL OR SIMILAR

After breakfast about 5 hours drive back to Tashkent. On the way, we stop along another large river flowing into the Aral Sea, Syrdarja. Accommodation in Tashkent. At the end of the evening transfer to the airport ( April group ). (A)

Finnish citizens will no longer need to obtain a visa to Uzbekistan in advance from February 2019.

The passport must be valid for at least 6 months from the date of entry and must have at least 4 blank pages. Upon arrival in Uzbekistan, a customs clearance form is filled in, a copy of which must be kept throughout the stay in the country. A copy of the passport must always be kept for inspections.

Check that your basic vaccinations are valid during the trip. Hepatitis A vaccination is recommended for all travelers to Central Asia.

The currency of Uzbekistan is the Som (UZS). The local currency cannot be exchanged in Finland. Euros or dollars can be exchanged for local currency at banks, hotels and currency exchange points. ATMs are used in large cities and can also be used to withdraw US dollars with international credit cards. Credit card payments are rare in the region.

Breakfast is included in the price of the trip. Book spending money for other meals and tip expenses for the trip, approx. 30 € / day.

The official language of Uzbekistan is Uzbek. Russia is also in common use. English is hardly spoken in the region. Russian language skills are a great help. The tour guide and local guide will be happy to assist if needed.

Uzbekistan’s climate is continental and dry. Temperature differences are large. Winters are cool, while summers are especially hot in the desert. Spring and autumn are the best times to travel to Central Asia. 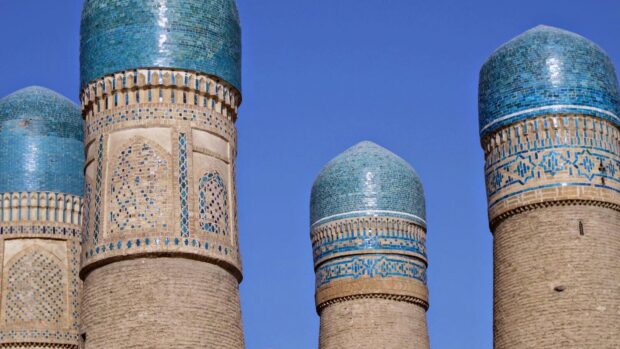